The Government Blockchain Association (GBA) announces that Ms. Jacqueline Cooper has been named the new host for ‘The Future of Money Governance & the Law’ podcast. 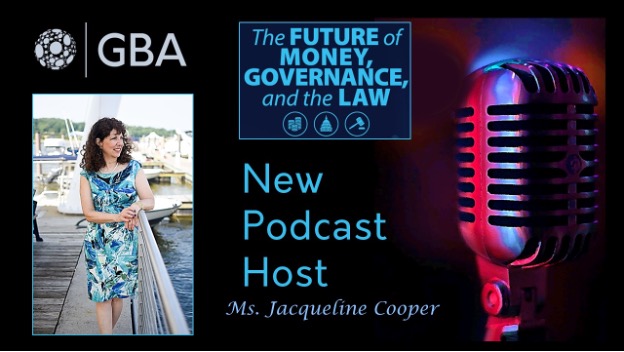 Ms. Cooper’s background is a Who’s Who of success, therefore, GBA has decided to interview her.

GBA: What news or secrets are you hoping to uncover with this podcast?
JC: Our blockchain community is huge, and GBA has a diverse membership. I hope those being interviewed will share behind-the-scenes knowledge of upcoming trends in the technology, legislation, and use applications.

GBA: What are some of the biggest challenges facing the adoption of blockchain right now?
JC: Ignorance is one of the biggest challenges facing blockchain adoption. That, and media feeding the glamour and celebrity hype. Additionally, there are differing philosophies of decentralized versus centralized, challenging the economic structure within the global community of financial markets.

GBA: Where do you predict blockchain is headed?
JC: Blockchain is a tool that will be integrated into document collection, identity protection, finances, healthcare, and more. The friction experienced in cross communication between different blockchains will be resolved. Just like cars traveling from one highway to another, we will be able to transfer information across blockchain platforms around the world with privacy and speed.

GBA: Who would you most like to interview and why?
JC: GBA members that are blockchain notables, and “thought leaders,” as well as individuals who don’t believe they are making an impact but truly are. Also, individuals from different countries, to discuss how blockchain is benefiting their citizens. Finally, I would love to interview Governors, Mayors, and legislators to discuss how blockchain can support elections, commerce, and careers.

GBA: How will blockchain tech impact the common citizen?
JC: In finances, health, education, art, music, and commerce, the common citizen will enjoy the developments created by blockchain. I am excited to be part of this journey and sharing the story as it develops.

Be sure to catch Jacqueline on GBA’s ‘The Future of Money, Governance, & the Law’ https://gbaglobal.org/podcast expose how blockchain is disrupting the world through technology.

The Government Blockchain Association (GBA), www.gbablobal.org is a non-profit, business-league organization, helping the public and private sectors connect, communicate, and collaborate over everything blockchain.